I bought a book at a church bookstore, that contained visuals for all of the 2009 program songs. I colored them, cut them out, and laminated them. We played games with them as we learned the song, so I liked having them seaparated. However, I'm done with them now, and since the kids pretty much know the song, I didn't know what to do with them. 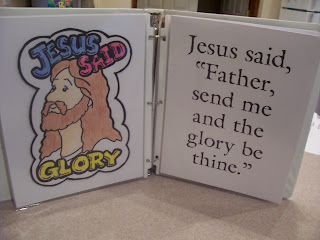 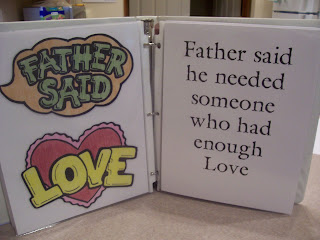 I got the idea of putting together a book from this site, to put them in a book, along with the lyrics. This way, if we're singing the song as opening or closing, or a quick review, I don't have to fumble through a bunch of pictures. I plan on doing this with all of the "program" songs, to keep them in one book. The pictures are laminated, so I can just pull them off of the paper and use them without the book again. I LOVE LAMINATING! :)
Posted by PerryParty3 at 4:31 PM