catchy title? Oh well, I tried. :)
I feel like my kids know the songs. They've worked really hard all year, practiced with their CD's. and they have them down. I also know that they can be strong singers with lots of volume from different activities we've played durring singing time. However, getting them to sing out in front of all those people, is another story. I've got a relatively shy group of kids with a few who can really sing out. When they do, the others sing out more. So I've been trying to think f something to help motivate them to sing out AND that I can use for the actual program, next week.
Although anything but revolutionary, this is what I came up with. 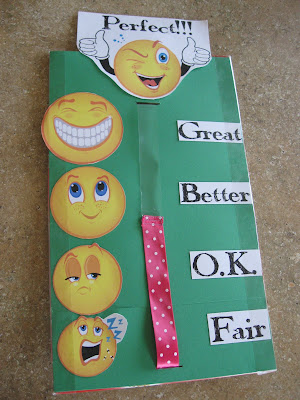 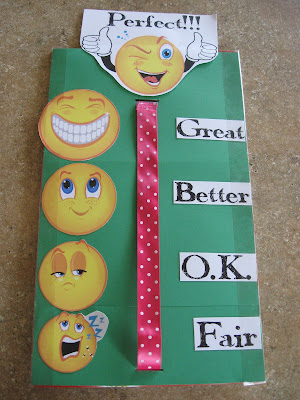 I went to msn clipart to download the smiley's. (just did a search for "smileys"). For the board, I trimmed down a bulk cereal box (you know, the kind you get at Costco), so that it would be nice and sturdy. I had a spool of ribbon laying around, that still had the "wrapping" on it. he ribbon had one layer of a clear plastic, the same width as the ribbon, so I actually sewed the ribbon to it, threaded it through the board, and then taped the other side down.
I am happy to e-mail you the pdf, so you can just print, cut and assemble. Just leave your e-mail in the comments. You can resize the font and images to make it work for whatever board you have. 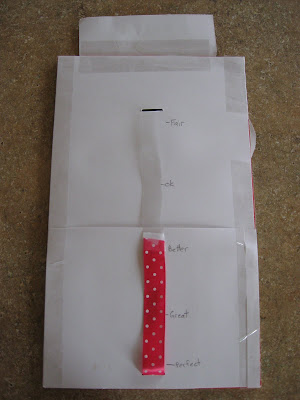 ON the back, I figured out where the ribbon would need to be for the different achievements, and made corresponding marks. This way, I don't even have to look at the front to figure out where the ribbon is.
I tried it yesterday, and it worked awesome. The kids eyes were glued on me, and it helped them forget how big the chapel is...at least I think it helped. :) The measurements are about 16x9, so it won't be too distracting to the rest of the crowd. I'm only planning on "conducting" them when they need it.
Good luck to everyone and their programs!
Posted by PerryParty3 at 12:49 PM 22 comments: