We have stake conference this week, so I get a week off! :)

However, this is what I had been planning on doing:

Have a table at the front of the room with an eraser, bean bag, or anything that can be easily grabbed.

Have two children come and stand at opposite ends of the table. Make sure they have their hands down by their sides.

Then read them a question from the song, (Example: How could the Father Tell the world of Love and Tenderness)

The kids then race to grab the object in the middle of the table, and have to recite the "answer" (He Sent His Son a New born babe, with peace and holiness) in it's entirety.

We are counseled NOT to have competitions in our primary, as this can often lead to hurt feelings, or focusing on "fairness". etc. BUT you could have a common goal for the entire primary. This could be as simple as bringing a cut-out car, drawing a line on the chalkboard with a destination at the end of the line. Then, every time a question is answered correctly, without any help, the car moves along the line to the destination. You could do the same thing with a picture of your primary trying to get to Heavenly Father, etc. Or filling a jar with marbles every time a question is answered. BE creative!

I always think that my primary will need these kinds of visual goals to motivate them, but most often, they are just enjoying playing the game, and don't need this.

I still might do this the first week of March, but I do feel like my kids know this song now, and It's probably time to move on.

Here's wishing you a successful primary Sunday!
Posted by sillysinginglady at 9:44 AM 5 comments:


I just had a couple of random things I wanted to share with you.

First of all, I wanted something to help the kids track their progress in learning the program songs.

You may remember this post, which I used for last year's program to help motivate them to sing out. 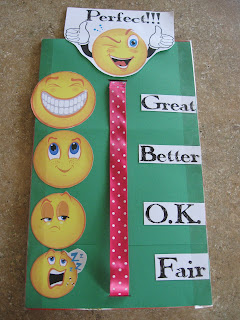 I loved the "grading chart" that I have seen in other places, but wanted to simplify it for the younger kids. After all, my 1st grader doesn't really understand what an A+ verses a C- means. So, I kept with the same theme, and used the same smiley faces. 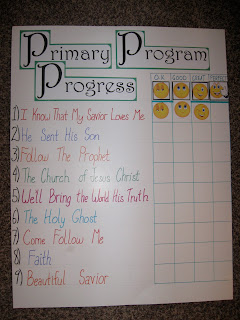 I plan on bringing it out on the 4th Sunday, when we are "testing" the song. I played around with just posting the smiley that they are on, or to keep all the smileys up as they earn them. Still not sure about that, but for now, all of the smiley's are going up. I am leaning toward just posting one smiley per song. So, if they are doing "great" then, that Smiley will be the only one on the row.  (The Extra songs are songs our presidency has picked out that we would like to use, in addition to the others, for the primary program)
I like to figure out what songs we are singing for the entire month. I made this chart on in excel, and just update it for each month. Before the first sunday of each month, I'll e-mail the file to the pianist and presidency members.  Ironically, I was the one that could never find the paper after I printed it out, so I finally taped it to the inside of my primary songbook. This has been working great for me! I always know where it is! 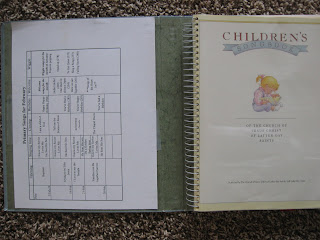 Here is a close up of the chart: 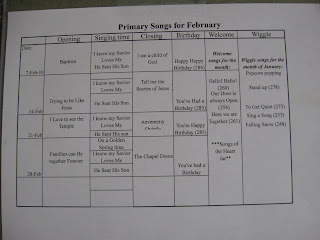 I mainly pick an opening song, list the songs I plan on using during singing time, a closing song, a birthday song (I get stuck in a rut and can't remember which songs we have sung), a welcome song and then I list a handful of wiggle songs that we can jump too if needed. 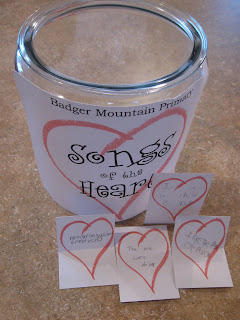 Lastly, we are doing the songs of the heart idea. I can't remember where I read about it, but thought it was a great idea. I just cut out a bunch of papers with hearts on them, and asked the kids to write down their favorite primary song. We keep the jar in the closet in the primary room, and I get it out each week. If we have extra time (HA!) we'll pull it out and draw out a song or too.
I went through all the cards and wrote down a list for the pianist with the page numbers. There are a few more "unfamiliar" songs that were written down, at least for our primary, such as "We'll Bring His World His Truth" so I'll make copies of that so we can have that for the kids who don't know the song so well.
Posted by PerryParty3 at 2:51 PM 8 comments:

REPORT: This activity went much better than expected! (YAY!) We ran out of time, so I'm bringing it back for next week. One thing we did, that the kids loved (probably because it was such a challenge) was we kept singing each phrase the way it was described on the back. For example, the first heart we put together said Girls sing, so everytime we sand the song, the girls sang just that phrase. Then, we added on to that. So by the end of the song, you are doing something different for each phrase. I'm not going to lie, it was VERY confusing, but we all had a blast!

(What is up with the blogging format?! It seems like they went back to the old way. So, sorry this post is formatted weird!)

So, I need to be quicker about posting my ideas. I swear I had this idea before crazychorister posted hers and Arizona fever posted hers, but now it looks like I'm copying. I think we were just all on the same brain waves. :) They both come up with the best ideas! Anyway, this is kinda a mix of both of their ideas.
So, I found out last week, that my primary does NOT know this song as well as I had hoped. So, this week, I needed to do some serious focusing and repetition. I wanted to do something with it being Valentines Day, so this is what I came up with:

I made hearts with part of a phrase on one side, and the remaining half of the phrase on the other. I tried to include pictures to help the younger kids. You can download the word document here and the PDF here. (I seem to have issues with my files, so as always, e-mail me if you have problems and I'll e-mail the file directly) IF YOU ARE HAVING PROBLEMS with the FILE, check below at the scribd thing. Does that work? 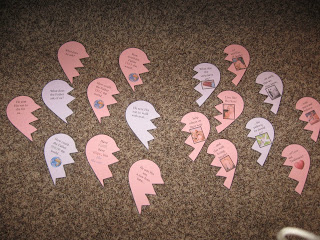 (Like my shag carpet in place of the chalkboard?) :)
For Sr. I will just mix them all up together to try to be more tricky. 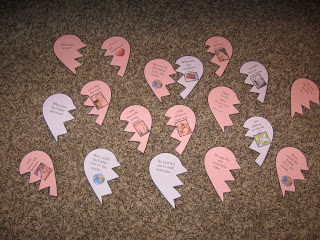 To play:
I'll have someone come pick the first half of the heart. (I'll try to use the sunbeams for this, so they can take participate)
Then, I'll call up someone else to find it's matching half. Once the match has been found, and the heart put back together, they can flip it over to find out how we are going to sing the song. We'll practice singing just that line of the song a few times, and then sing it with the rest of the song, but sing it "that way" when we get to that particular line. (Is this clear as mud?!)
For example, it might say "whisper sing" on the back of the matched heart, then we'll sing just that line, whisper singing, a few times. Then, we'll sing the whole song like normal, but just "whisper sing" when it comes to that line.
For Senior primary only: we might try singing all the different ways at once. First phrase: boys sing, Second phrase: whisper sing, Third phrase: stand on one foot, etc. We'll see how it goes... 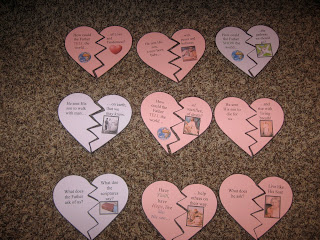 The different ways we will be singing:
Boys Sing
Girls Sing
Clap the beat
Turn the lights off
Whisper sing
Loud Sing
Stand on one foot and sing
Slow sing
Sing to back of room

So, the hand mapping thing did. not. work. with my primary. It was actually hilarious watching these kids wave their hands around. AFter a few repeats, I stopped. It was pointless.

As far as the rest of the "plan", it went okay, but not as well as I had hoped. Did you have success? Did you do something different?  I really thought my kids knew this one, but apparently, they have never heard it. Made for a fun 20 minutes of singing solos for me. (ACK!) I'm going to have to do some serious brain storming this week!
Posted by PerryParty3 at 6:11 PM 11 comments:

This is a fairly familiar song to the children, which makes our lives easier! This is a pretty simple idea, but thought I'd share it anyway. The Crazy Chorister has a much more fun approach to the introduction, so make sure you check her out!

To begin, I will sing the song through for them and ask them to count how many times I sing "His Son" in the song. (5 times)  You could have them stand up whenever they hear it, as well. Kids need to MOVE! :)

Then, I will show them the bulletin board where I have posted the Questions from the flipchart. (you could mix these up

Below that, I will have several pictures. All of the "Answer" pictures will be there, but some other random pictures from the GAK kit will be there too. The answer pictures, are the same that are in my flipchart,  in an effort to be consistent and not confuse them. You can download the word file of Just the pictures here:   UPDATE: Apparently there is some problem with the last picture of the JUST PICTURE file. It's the picture of the girl with the savior in the background. I got this picture off of Sugardoodle.net (link to the side) under the category of Jesus. I'm not sure why this picture is not showing up. When I download the file onto my computer, it's working for me. Is everyone having this problem?


Update part II: I've uploaded a different version of the file. Please let me know if you are still having problems viewing the pictures! 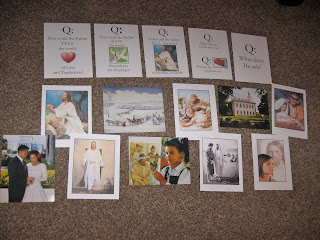 I'll tell them that this song is made up of Question and Answers. I'll sing them the question, then the answer, and ask them to decide which picture describes the answer best. Then, we'll place the corresponding picture underneath it's question. (Most of the kids will probably figure out the "answer" pictures since they will have a white border around them, and the GAK pictures do not, but that's okay!) 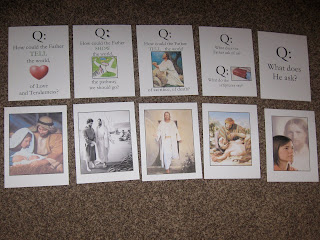 (This is a picture of what it should look like at the end, after the "other" pictures have been taken away.)

After each Q & A, I'll have them sing with me, while mapping the melody with our hands. (Place your palm flat towards the ground, fingers extended, and raise and lower it according to the notes of the song.) I like to do this as it gives them something to focus on and helps them physically understand the relation of the notes.

If time at the end, I'll have them stand up on the Questions, and sit down on the Answers, as we sing through the whole song.
Posted by PerryParty3 at 10:09 PM 12 comments:

Flipchart: He Sent his Son

Here is my version of the flipchart for February's song: He Sent His Son.
Download the Word doc HERE
Download the PDF HERE
(drop me an e-mail if the files aren't working) 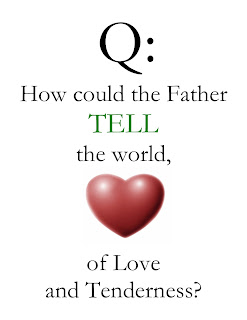 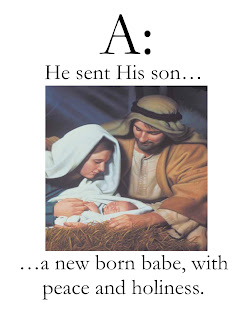 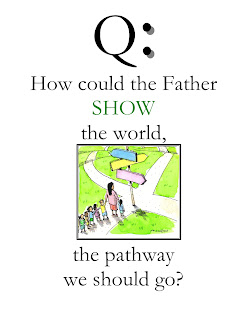 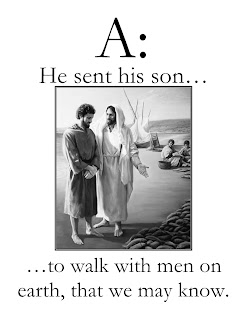 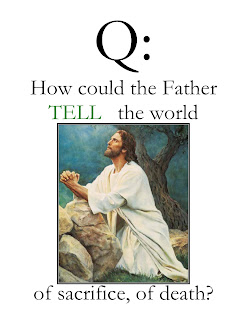 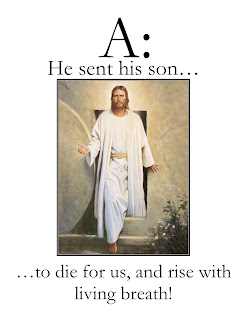 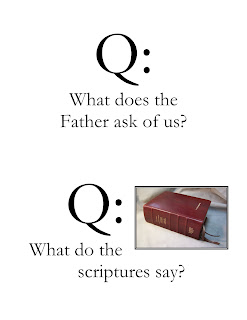 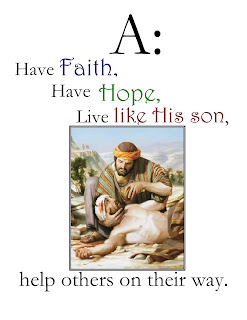 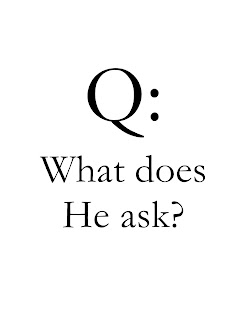 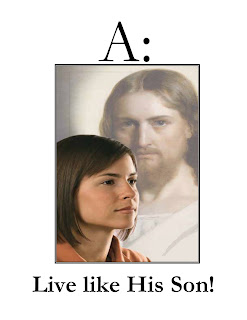