Sorry this is getting out so late. I had orginally been planning on doing something completely different, but after I had made it last night, it just didn't seem right. I'll probably use it for something else, so stay tuned!

For our primary, I've decided to teach the entire primary just the 1st verse about Adam, and the verse about President Monson (in the March 2010) friend. Then, I'll have 5 other groups/classes sing verses for 5 other prophets. I'll include those below.

Update: I've been getting lots of questions about if I will do both Monson and Adam in the same week. I think I will do Monson first, and then Adam next week, using the same idea. I just don't see how I can put up another set of footprints without wasting everyone's time. Besides, after introducing the chorus, and working on the new verse, I don't think there will be extra time.

To start off, I'll ask the kids to pretend we are going on a hike in the mountains. It is very dark. What tool could we use to help us see better. When they say "flashlight", I'll show them my flashlight. I'll tell them that the light from the flashlight will help us to stay on the path, and not fall off or to go "astray". I'll tell them that to go astray, means to go off the right path.

Then I'll show them a picture of a President Monson, and ask them who it is. We'll talk about how a prophet is like a flashlight, in that he helps us to stay on the path of righteousness, so we can return to our Heavenly Father. Our Prophet can guide us because he knows the way!

I'll sing the chorus to them once, asking them to count how many times I sing "Follow The Prophet."
(six). Arizona forever, posted a great video of ASL for the chorus.

Then I'll show them the board (I'll use the bulletin board) with footprints all over it. At the Top Left Corner of the board, I will have a picture of a group of people (Go to sugardoodle.net for clipart) and at the Bottom right, I'll have a picture of the Prophet we are singing about. 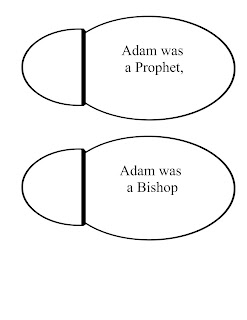 I'll tell them that we have to follow the footprints to get to the Prophet, but only some footprints will lead us in the right direction. Some footprints have one word that is not part of the song. When we find a footprint with the wrong words on it, we'll take it down. By the time we are finished, we should be left with a footprint path that leads from us to the Prophet. (see picture below)

To play, I'll have a child come and pick any footprint. I'll ask them if those are the right words, or the wrong words. Some are pretty obvious, but others would make complete sense. If they are not sure, we'll sing the verse together as a primary and have them listen extra carefully. Then I'll ask them again if it belongs or not.

Here are links to footprints with the Adam and Monson verses on them. If you are having problems downloading them, it is probably because I have Microsoft Office 2004 and you have a newer version. For some reason, it's messing up the format.

You'll want to pre-plan your maze route, and put the footprints up in the right spots, or it won't work! :) (see the example below) Remember, to take down the wrong footprints. You should only be left with the footprints that make the path to the Prophet. 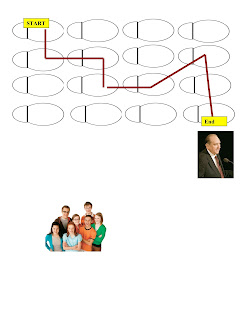 Here is a link to some blank footprints, so you can copy as many as you want and write in your own words. 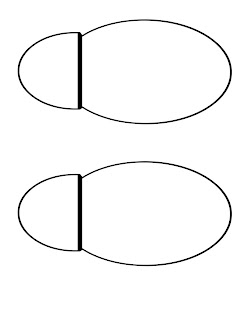 Here are our other verses, that will be given out to classes later. All these were found in the Friend, and I got approval to sing. I'll probably at least sing through them once in the coming weeks, but we won't spend a lot of time on them.

Nephi: (June, 2001 Friend, Page 46)
Nephi was a prophet, tried to get the plates.
He dressed up as Laban by the city gates
With his brothers waiting, Nephi went inside.
He knew God would help him, and with him abide.
Samuel: (June, 2001 Friend, Page 46)
Samuel the prophet, Lamanite by birth,
Prophesied the time when Christ would come to Earth.
Cried to all, "Repentence!", shouted from the wall.
Wicked would not listen, tried to make him fall.
Joseph: (June, 2001 Friend, Page 46)
Joseph was a prophet, first one in our day.
He saw God and Jesus when we went to pray.
he prayed with great faith to know which church was true,
Jesus said to "Join none. Truth shall come through you."
Monson: March 2010 Friend, page 25 written on the picture of president Monson in bottom Right Hand corner)
Heavenly Father loves us, and wants us to return,
he blesses us with peophets who help us to learn.
President Monson humbly leads God's church today.
As we heed his words, we'll walk a righteous way
We will also be doing Daniel, and Noah from the song book.
Posted by PerryParty3 at 10:54 PM